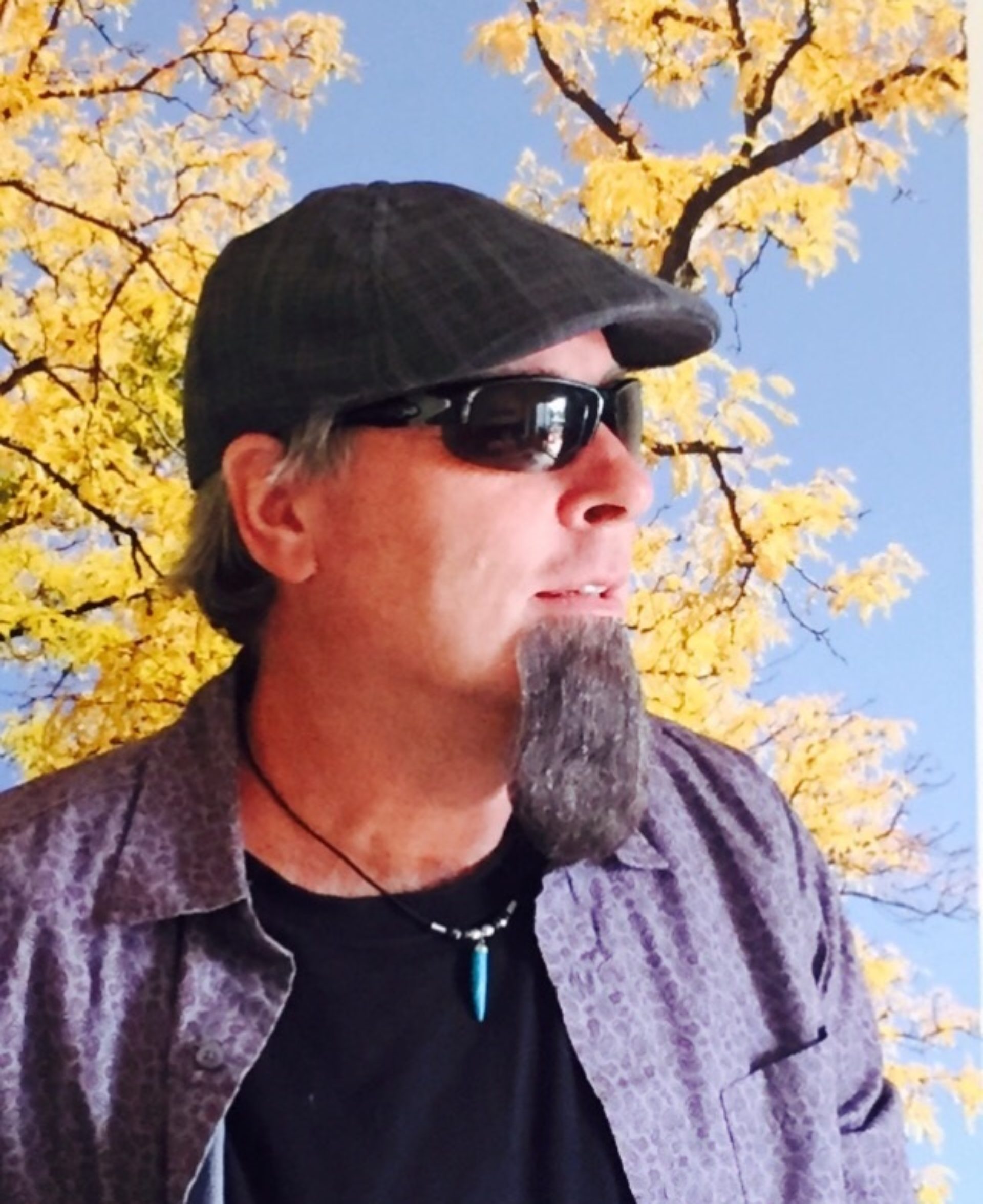 Captain Jon Diaz opened his bedroom wall safe and retrieved his SIG-Sauer P80 laser pistol, then loaded the power cartridge into place. The familiar “click” triggered a rush of adrenaline, a conditioned response from years of stressful police work. He slid the weapon into his holster.

Casually Jon said, “Open blinds.” A moment later, the virtual horizontal blinds morphed into a stunning wide-angle 3D view of the Santa Monica pier set against the glassy Pacific Ocean. He eyed the calming scene that melded its vivid blue with lighter green in patches above the shallows. The coastline boasted glimmering windowless high-rise buildings of curved steel and the reflections of the city’s activities on the polished surfaces.

Jon leaned over his bed and kissed his wife’s cheek.

“Maybe a little,” he said, forcing a smile while gazing into her dark almond eyes. “It’s the President. He’s coming here to deliver a campaign speech. I’m heading the security team.”

“Why is he coming here?” asked Leilani.

Jon sighed. “Stirring up humanoids is guaranteed to get publicity for his reelection campaign.”

Jon faced the mirrored closet door, inspecting his appearance. “He needs votes. The future of the humanoid population is a pivotal issue.”

Leilani rolled over, her sixth-month baby bump giving rise beneath the sheets. “All this trouble over a few nanochip implants and artificial limbs. I wish the technology never happened.”

“You and millions of others.”

“You’ll be home for dinner?”

Jon kissed his wife once more and then strolled into his son’s room, Jon Jr., or JJ as he liked to call him. Jon sat on the bed, admiring the peaceful bliss of the five-year-old’s slumber, and kissed him gently on the forehead.

Jon closed the front door behind him, walked to the elevator, and descended nine floors. He paced to the police Mach II hovercraft, placed his hand on the biometrics pad, and waited for the domed clamshell hatch to open.

Jon climbed inside, triggering a hologram above the dashboard of a female 3D virtual assistant dressed in an LAPD uniform. “Good morning, Captain Diaz,” she said.

The hovercraft sprang to life and sped in autopilot mode to the 405 expressway. “Call Commander Kelly.”

Commander Kelly looked stressed, more than usual, thought Jon. Kelly’s pale skin, thinning gray hair, and the bags under his eyes made him look older than his fifty-five years suggested. His oversized uniform hung loosely from his long, lean frame due to recent stress-related weight loss. He hunched over his desk and said, “Captain Diaz, I hope you enjoyed your time off.”

“We have another bank robbery in process. Units are rolling. ETA four minutes.”

“No!” said Commander Kelly. “You don’t have backup. Wait for the patrol units to show up.”

The hologram changed from a view of Commander Kelly to a live 2D video stream of the robbery where Jon saw splayed bodies on the floor, blood pooling next to them. He watched the choppy gait of three humanoids, wearing long black trench coats and chimpanzee masks. One held huddling patrons hostage at gunpoint while the other two stuffed pillowcases with cash and safe deposit box items. “I’m going in, boss.”

Jon switched the hovercraft to manual mode and turned onto Wilshire Boulevard, lights flashing, siren screeching, and speeding down the center divider past unsuspecting civilian vehicles. “I’m less than a minute away.”

The police hovercraft’s cockpit lid opened before the vehicle came to a stop. Jon grabbed a laser cannon rifle from the gun mount, jumped from the craft, and took cover behind the hovercraft. He activated the commlink earpiece. He scanned the bank’s main entrance. Seconds later, the three criminals emerged, running, each holding a dangling pillowcase and a laser pistol.

All three humanoids opened fire simultaneously. The police hovercraft’s domed lid exploded into shards and knocked Jon onto his backside. He rolled over in time to glance at the criminals running at inhuman speed and then jump with astounding height and agility into the back of a moving EV pickup truck.

Jon aimed from his prone position and fired two blasts. The lasers landed short of the target as the pickup rounded the near corner. Damn!

Jon rose to his feet and jumped inside the police hovercraft. Shards of safety glass covered the inside, but the vehicle sprang to life. Jon accelerated and shouted through his earpiece, “Dispatch, this is Captain Jon Diaz. I’m in pursuit of three armed and dangerous humanoid suspects driving a black Ford EV pickup heading south on Highland Avenue. Request backup. Copy?”

“Patch me into Commander Kelly.”

Commander Kelly’s irritated voice rang in Jon’s ear. “You crazy bastard. Where are you?”

“Commander, I’m in pursuit of three humanoid suspects on Highland Avenue driving a black EV Ford pickup. I have a visual.”

“Can you get a laser-lock on them?” asked Kelly.

“Negative, sir, my weapons system is disengaged, cockpit damage. I have a laser cannon.”

“Stay on them. I have surveillance drones headed your way.”

“Copy.” Jon’s hovercraft weaved through traffic. The flashing lights and siren were non-operational, as was the protection of the domed lid. He saw the EV truck veering recklessly past stalled vehicles and then onto the sidewalk, bypassing a clogged intersection. Jon followed the same path, gaining ground.

The three humanoids in chimpanzee masks were poised on one knee in the truck bed and had eyes on him. They raised their guns and fired. Jon swerved, cringing as the laser beams exploded into nearby civilian vehicles.

Jon aimed his cannon at the suspects, but the moving target’s line of sight rapidly changed, placing dozens of civilians in harm’s way. Not worth the risk.

The three humanoids opened fire again, hitting Jon’s hovercraft, disabling the fuel cell engine. Jon jumped from his vehicle and ran after the criminals, who had slowed in bumper to bumper traffic. He had closed the gap between them to half a block, using the buildings as cover, when another volley of laser blasts shattered a nearby glass building. Jon fell, rolled over, took a knee, and raised his laser cannon to his shoulder. He pulled the trigger, and the ensuing explosion blew the truck onto its side, ejecting the criminal humanoids from the truck bed.

Jon rose to his feet and continued pursuit, but panicked civilian bystanders moved chaotically in every direction, blocking his aim. Without a clear shot, he helplessly watched one of the super humanoids break the glass of a civilian vehicle, toss the driver onto the street, and climb inside, followed by the two accomplices. Jon watched helplessly as the criminals accelerated around a corner. Damn! Who are those guys? How do they run so fast and jump that high?

Jon hitched a ride with a patrol vehicle and approached the three-story gray stucco office building in East Los Angeles that housed Precinct Five, employing over a hundred police officers and clerks. The precinct policed a wide area of LA’s inner city, including Federal District 11, also known as The Reservation, a moniker contemptuously coined by the residing humanoid population.

A large crowd had assembled outside the precinct’s front entrance, many waving hand-written signs. Jon read some of the sign’s statements: No More Humanoids, Humanoids Are NOT Human, Stop Playing God!

The hovercraft stopped a few yards from the group, taking in the scene. Jon estimated two thousand, double that of last week. Police officers in riot gear stood firm, preventing the horde from engulfing the entrance. The mob pushed and shoved, the mass of humanity swaying back and forth in waves of fluid motion.

Jon felt surging angst in his gut, fearing an over-aggressive police officer or an over-zealous protestor would tip the delicate balance between a semi-peaceful protest and an angry mob. Images of a violent riot swirled in his head.

They parked on Precinct Five’s rooftop hoverport, alongside a row of gleaming lookalikes, all painted the traditional black and white with “Police” lettered on the side. The unique identifying numbers painted on the hood and side panels were the only distinguishing features. The tinted clamshell cover opened, followed by the retracting door. Jon stepped out and shook hands with the attendant.

“Good morning, Captain Diaz,” said the attendant, a man Jon knew as a retired police officer who couldn’t seem to find a life away from the department.

“Just fine, thanks. My oldest made the high school golf team. That boy can really sling those clubs, hits it a mile high.”

“That’s great, can’t wait for my son to start sports. He’s a baseball fanatic. You take care now.” Jon tapped Albert on the shoulder, then walked briskly into the elevator, transporting Jon into a den of humanity that dealt with a world of senseless crime, hatred, death, and disasters.

He entered his spacious office decorated with calming pictures of ocean coastline scenes evenly spaced along the off-white walls, the carpet an innocuous beige. A family portrait sat on his mahogany desk.

Commander Kelly entered the office and sat opposite Jon. “I’m getting too old for this, Jon. I’m out of here in three months, full pension.”

“Jon, shit hit the fan last night. Governor Lundquist thinks the problem with these super-charged humanoids is out of control, and he’s lost faith in our ability to deal with it.”

“What do you think?”

Commander Kelly shrugged. “It’s hard to disagree. We could use the help.”

Commander Kelly rose from his chair, reaching behind to massage his lower back as he paced the office space.

Jon raised his eyebrows. “Not exactly a vote of confidence for LAPD.”

Commander Kelly sat down, scratched his head, and raked his fingers across his receding hairline. He leaned forward, resting his arms on his knees. “President Jackson decided to send an Army General named Thaddeus Thurmond out here to work with us. This guy’s a no-nonsense hard-ass. We’ll be working under him until we get control of the streets again.”

Jon’s stomach lurched. “What? The Army? Isn’t that a bit over the top? Shouldn’t the FBI be involved?”

“For some reason, the President believes serious firepower is in order.”

“Jon, these super humanoids robbed four banks, killed fourteen civilian bystanders, ten security guards, and two police officers. These criminals are like nothing we’ve ever dealt with before. “It’s like freaking Bonnie and Clyde, Jesse James, and the Terminator rolled into one, reborn and out for vengeance.”

Commander Kelly nodded. “It’s not just the super humanoids crime spree; it’s the resulting protests and the riots. According to Governor Lundquist, President Jackson says he doesn’t want another mass murder nightmare like we had in 2072. If a few jacked-up super humanoids could cause so much trouble, what could an army of them do?”

Jon considered the potential national security threat. “Have we identified any of the perps?”

Commander Kelly shook his head. “No. We have nothing. Each time the robbers wore the same chimpanzee masks and trench coats. Jon, it can only get worse if we don’t nip it right now. We’re going to need backup — and serious firepower. Plus, we can’t hide the truth from the public any longer. The word’s out, and humans are starting to panic.”

“Agreed,” said Jon. “I saw the news feed of the protest march on city hall yesterday.”

Jon contemplated the day ahead. “When can I expect the General?”

“He’s waiting for you now.”

Commander Kelly leaned in once more. “The situation is close to spiraling out of control. I need you to cooperate. Fully. And Jon, make no mistake, our precinct is ground zero.

THE C.O.D.E. CONSPIRACY is Available from Amazon Books